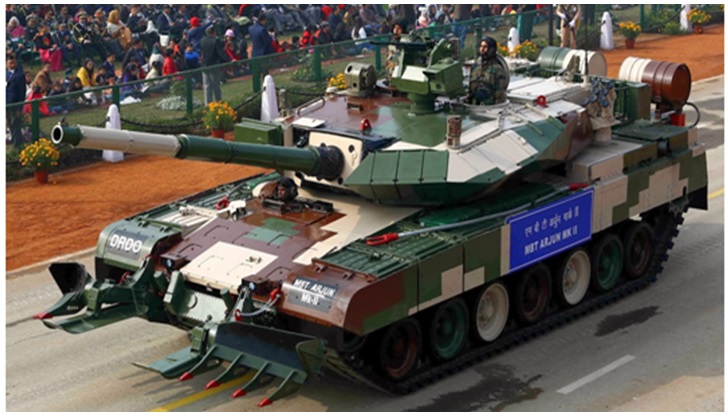 The first breed Indian army tanks include T-54 , T-55  and the first indigenous Vijayanta tank. Both these tanks have already been phased out of army fleet . The legendary Russian T-72 tank , which Indian army operates in large numbers  and still continues to be the  mainstay of the Indian Army tank fleet .

The Indian Army also operates Arjun MBT which is India’s second indigenously designed and developed main battle tank ( MBT ) . The Indian Army Tanks also includes  T-90 tanks ( Bhishma ) which is the latest addition to the Indian army . The T-90 tank is considered to be amongst the best Russian MBT .

The  Indian Army has extensively  used these tanks during India-Pakistan wars fought  between the 1960s to the 1980s. Pakistan had attacked India in 1960 and 1965  and  was defeated by the Indian armed forces .

In this tank battle , 2nd Lieutenant Arun Khetarpal and his team defeated the Pakistani attack and destroyed  10 Pakistani M48 Patton tanks .He himself destroyed 7 Patton tanks  before he was killed in action. The casualties were heavily skewed against the Pakistani force  with total 46 Pakistani tanks destroyed and India lost only 10 tanks. However, in this battle ,  2nd Lieutenant Arun Khetarpal made supreme sacrifice for his country. He has been awarded Param Vir Chakra for his exemplary courage and valour.

The production line for these tanks subsequently started in India at  Heavy Vehicles Factory ( HVF )  at Avadi in the state of Tamil Nadu. The HVF is a specialized manufacturing factory  set up in 1961 by the Ordnance Factories Board, Government of India to manufacture heavy battlefield equipment such as infantry tanks and other armored vehicles .

The Vijayanta tank had gone through a number of upgrades  many different varients were manufactured such as Mark 1A , 1B and 1C . The total number of  Vijayanta tanks produced by  HVF is estimated to be almost 2000 units . This tank was phased out of service from the Indian army by  2008 . The Vijayanta MK2 was the last upgrade .

The legendary T-72  tank belongs to the  second generation of Soviet modern  tanks produced by the  erstwhile soviet union during the cold war period .  The T-72 tank first entered in to production in 1971 . The T-72  was one of the most widely exported tanks still  currently in service with over 40 countries .

The Indian T-72 Ajeya Tank was  manufactured under license production for  Russian T-72M1 . The production started in the late 1970s at HVF Avadi . So far over  1800 tanks with different variants have been delivered to the Indian Army.

The T-72 continues to be the main stay of the  Indian Army’s armoured Main Battle Tank ( MBT ) force which  consists of 1,800 plus  T-72M1 Ajeyas  tanks . Intially India  imported these tanks from the Soviet Union from 1982 to 1986  but later on, these tanks were produced locally by Heavy Vehicles Factory ( HVF )  at Avadi .

The T-72 tank is equipped with the 125 mm  main gun which  is capable of firing both standard main gun ammunition, including HEAT and APFSDS rounds. India has upgraded T-72 over the years.

There are many variants of T-72 tanks.The T-72A first appeared in 1979, with thicker armor. Next came the T-72B in 1985, which incorporated features from the newer T-80. The  T-72B variant had a laser rangefinder and thicker armor. The Indian army does not operate T-80 which is often confused with T-72 tank . The T-80 Tank is a totally different tank manufactured by different Russian factory.

India has been working on a long term up-gradation program for T-72 Ajeya’s in stages. The first stage of the upgrade is known as  the “Combat Improved Ajeya”.

The second generation indigenous Arjun Tank was still under development and it felt necessary to upgrade the existing fleet of T-72 . As a part of T-72 CI Ajeya upgrade program , India purchased 300 Polish SKO-1T Fire Control Systems In 2002 .These were  already  being used on the polish PT-91 MBT. This kit had  thermal imaging sight to enhance the night vision capability of the T-72 tanks .

As per the  mid-2011 press release, India defence spokesman stated that 250 vehicles had so far been upgraded to the CI Ajeya.

India’s Ministry of Defense ( MoD ) has approved the procurement of 1000 new engines for the Indian Army’s T-72M1 Ajeya main battle tank ( MBT ) force. The majority of engines will be produced locally by technology transfer with foreign collaboration with the Engine Factory Avadi ( EFA ) ,

The EFA is a subdivision of the Ordnance Factories Board. The new engines for T-72 will significantly improve the  tanks performance in terms of mobility, agility, and acceleration.

The Russian T-90 tanks was the latest addition to the Indian Army’s formidable  tank fleet . The Russian army inducted T-90 tanks in 1992. The induction of these tanks in Indian army was a logical step as majority Indian army tanks have Russian origin .

India acquired first batch of T-90 tanks in  February 2001 when  Indian Army signed a contract for total 310 T-90S tanks. Out of these total ,  124 tanks were to produced in Russia and the remaining  were to be delivered in ‘knocked down’ form for its final assembly in Indian  HVF Avadi .

The Indian army received the delivery of  first T-90S MBT  in January 2004. As per contract the HVF also started assembly of T-90 tanks in india at HVF Avadi . These  locally assembled tanks are christened ‘Bhishma’.

The Indian T-90 tanks were  fitted with the Shtora self-protection system and Catherine thermal imagers from Thales of France and Peleng of Belarus. The first batch of 10 T-90  Bhishma tanks  were inducted into the Indian Army in August 2009. The Indian army intends to take the T-90 tank count to 2000  tanks by 2020 .

The Indian army is now  working on the project to equip the existing T-90 tanks with long-range anti-tank missiles in order to enhance the combat capability. This will significantly improve the T-90 strike range up to 8 KM with day and night capability .

However during the actual user field trials conducted by the Indian army under various battle conditions , several  problems were noticed in the Arjun MK1 . And therefore Indian army  could not induct Arjun MK1 in large numbers .

These improvements have now been incorporated by DRDO in the Arjun MK2 version which is being evaluated by the army . However, the initial reports suggest that the Arjun MK2 weight of 68 Tons still continues to be a major concern area for the army  which may cause logistical issues . The Arjun MK2 is expected to be ready for induction by 2020 .

Arjun  is powered by a German single MTU multi-fuel diesel engine which delivers  1400 HP . The tank transmission is also by German company RENK. The Arjun can cruse with  maximum speed of 67 KMPH . The Arjun tank  is one of the heaviest tanks in the world ( MK1 – 58 Tons , MK2 – 68 Tons )  which  affects the mobility despite good engine power .  This has been identified as one of the major area for improvement specified by the Indian Army which DRDO is working on .

The Arjun tank is protected by “Kanchan” armour of type modular composite armour. The Kanchan armour has been  indigenously developed by Defence Metallurgical Research Laboratory ( DMRL ) . The Kanchan armour has been designed to defeat the   APFDS and HEAT rounds fired at the tank . The Arjun  tank also offers protection against mines . The Arjun tank crew is also protected against nuclear and biological attack .

The DRDO is currently working on the development of new variant Arjun tank MK2. The Arjun MK2 will be based on the suggested improvements in the Arjun Mk1 . After extensive user trial evaluation of Arjun MK1 tanks , The Indian army has suggested 93 improvements out of which 13 are major improvements .

The Arjun MK2 has been designed with features of third generation tank . The DRDO has completed the design and development of Arjun MK2  in a record period of barely three years . During the evaluation conducted by the Indian army , The Arjun MK2 has performed very well  as against T-72 and T-90 series Soviet tanks .

The Arjun MK2 incorporates the latest main battle tank technology which offers excellent firepower , mobility and protection to the tank crew . The Indian Ministry of defence apex decision-making body “Defence Acquisition Council” ( DAC )  has already approved the production of  118 Arjun MK2 tanks . These tanks will be produced in Heavy Vehicle Factory at Avadi .

However , The DRDO is still struggling to achieve a significant reduction in the weight Arjun MK2. Although Arjun MK2 has performed very well in protection during the user evaluation trials  but the tank weight has increased from Arjun MK1 58 ton to Arjun MK2 68 tons . The Indian army is essentially looking for lightweight tanks which should not be more than 50 tons .

The Indian army operates the substantial number of T-72 tanks which are due for retirement.  And therefore, The Indian government has issued global RFI – Request For Information in 2016 for the procurement of  1770 FRCV – Future Ready Combat Vehicle.

The Indian Army is actively scanning options to procure the new main battle tank for the Indian army . This procurement is named as  Future Ready Combat Vehicles ( FRCV ) . This procurement of FRCV will be under recently announced government policy framework  Strategic Partnership ( SP )  model  . As per this model , the foreign vendor has to collaborate  with an Indian partner company .

The Indian Army Chief General Bipin Rawat has recently concluded his six-day visit to Russia . The procurement of 1770 FRCV was top on his agenda as Russian latest T-14 Armata tank is one of the  key contender in this deal .

The main contenders for FRCV include the Russian T-14 Armata, the Ukrainian T-84 Oplot , the French Le Clerc, and the South Korean K2 Black Panther. The Indian Army and government seems to be taking the right steps to  ensure the early induction of  new main battle tanks for the Indian Army.

During India China War 1962 , the Chinese army was far better equipped. However, now Indian army armoured units quite well equipped with latest tanks in its inventory .