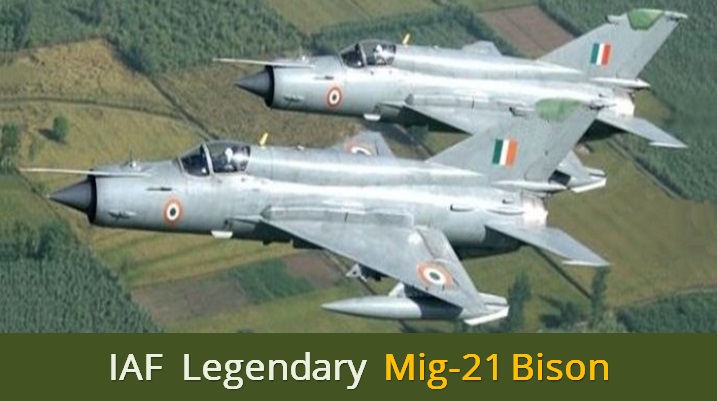 The legendary Indian Air force Mig-21 is once again in news , and this time  for all the good reasons . The Indian Air Force Mig-21 has recently shot down a Pakistani F-16  in a dog fight over the skies of Kashmir . This was not an ordinary kill by Indian Mig. This was a historic kill , which demonstrated  , the man behind the machine still matters.

The Mig-21 had a glorious track record of combat history and Indian air force extensively used Mig 21 in 1971 Bangladesh Liberation war, Kargil War 1999 and latest 2019 war with Pakistan. In this article, we will discuss in detail.

The legendary Mig-21 is a Soviet Union era fighter aircraft , built by  Mikoyan-Gurevich Design Bureau in 1956 . The Mig-21 was first introduced in service in 1959 , which can perform both as a fighter and interceptor, in the aerial combat.

The Mig 21 also continues to be amongst most widely produced fighter aircraft with more than eleven thousand Mig-21 used by eastern European countries which include , East Germany which operated the largest fleet of Mig-21 more than 500 aircraft,  Romania, Yugoslavia, Poland and India .

India became the second largest operator of Migs with a fleet size of  250 different variants of Mig-21 still being used by Indian Air Force.

India is currently the largest operator of Mig-21 and operates some of the most advanced versions, specifically designed and produced for the Indian Air Force. The Indian Air force acquired Mig-21 from Russia in 1961.

The Indian Air Force operates a large number of Mig21. These Mig21 have gone through a number of upgrades. The first few upgrades were carried by Russian companies. However subsequent Mig21 were upgraded by Indian state owned company , HAL – Hindustan Aeronautics Limited.

The Mig-21-Bison is the most advanced amongst the variants being operated by Indian Air Force.  India started the development of its own indigenous fighter aircraft under the project  LCA Tejas  “Light Combat Aircraft”.

The LCA project is being jointly developed by Indian state company HAL and ADA  for the last three decades. The LCA is a single-engine , multirole fighter , which was supposed to replace a large number of ageing Migs present in the IAF inventory.

The  Indian Air Force ( IAF ) is currently operating Mig-21-Bison , Mig-23 , Mig-27 , which are due for retirement in the next decade. These Migs have already undergone a number of upgrade programs to ensure their combat worthiness and to extend effective lifespan.

The  Indian Air Force is now being constrained to operate the ageing fleet of Migs primarily due to declining squadron numbers and a substantial delay in the development of indigenous fighter LCA Tejas. And therefore, the Indian Air Force had left no other choice , but to extend the retirement of these ageing Migs.

The MMRCA Program For 126 Fighters for IAF

The Indian ministry of defence   had  also initiated a contingency program known as the MMRCA Program. Under MMRCA ( Medium Multirole Combat Aircraft ) program , the Indian Ministry Of Defence had approved to acquire 126 latest fighter planes for the Indian air force to compensate for the  inordinate delay, in the LCA Tejas program .

However , during Congress rule prior to 2014 , the MMRCA program could not proceed further in 15 years, despite the IAF squadron strength had declined to an alarmingly low level of  31 squadrons as against required squadron strength of 42 squadrons. IAF will need at least 42 squadrons to face two-front war, simultaneously with China and Pakistan.

The BJP government came to power in India in 2014 with a massive mandate , under the leadership of Narendra Modi . The Modi government immediately fast tracked, first the induction of  LCA Tejas in Indian Air Force and also clinched the deal with France to acquire 36 Rafale manufactured by Dassault Aviation.

The Indian Air Force had already short listed Rafale as level one bidder after elaborate evaluation process lasted for almost decade during previous congress rule prior to 2014 . The Modi government has also initiated, a number of measures ,which include private sector companies participation , necessary to ramp up the LCA Tejas production to 20 Tejas LCA per year .

The Modi government has already initiated the MMRCA 2 Program for the acquisition of 118 latest fighter aircraft for the Indian Air Force . LM F-21 which is a advanced version of F-16 specifically designed for India, French  Rafale , Russian Mig-35 , Saab Gripen, F-18 Super Hornet are contending for this Indian mega deal.

Although , the Mig-21 were inducted into the Indian Air Force in 1964 ,  but played a very limited role  in 1965 war with Pakistan , primarily due to non availability of trained pilots and limited numbers . However , IAF carried out number of defensive sorties and gained a valuable experience  for operating this supersonic fighter for the first time.

However, after the 1965 war , the Indian Air Force rebuilding started on a war footing and by then , the HAL had also established, a production line for the Mig in India . During this period , a large number of  Mig were inducted into the Indian Air Force.

The Indian Air Force extensively used Mig-21 during the 1971 war with Pakistan. In this war , India defeated Pakistan and the East Pakistan was liberated as an independent country of Bangladesh. In this war, Pakistan signed , an instrument of surrender and 93000 Pakistan army soldiers had surrendered.

The Indian Air Force also extensively used Mig-21-Bison , during 1999 Kargil war with Pakistan . The Pakistan army had started Kargil war , by intruding into the Indian territory. The IAF had launched Operation “Safad Sagar” to provide crucial air support, to the Indian army operation “Vijay”, started to evict the Pakistani soldiers and recapture the Indian positions. In this war, the IAF used Mig-21-Bison, primarily for ground attack role against Pakistani positions.

The Indian Air Force carried out a massive mid-night surgical strike against Pakistan based terrorist groups using IAF Mirage 2000 to avenge the terrorist attack in Pulwama in the Indian state of Kashmir. The Indian air force surgical strike had completely destroyed these terrorist camps and almost, 300 terrorists were eliminated in these three attacks conducted simultaneously.

This was a major setback for the  Pakistan army and ISI. The Indian surgical strike sent a clear message to Pakistan that it can no longer hide behind the Nuclear weapons.

Next day morning , the Pakistani air force tried to attack the Indian army brigade headquarter near the Indian Kashmir border at Naushera . Three Pakistani F-16 had intruded into Indian air space were challenged by two Indian Mig-21-Bison already on a combat patrol.

The Indian Air Force had also scrambled four latest Sukhoi 30 MKI and two Mirage 2000 to engage the Pakistani F-16 ,  intruded in Indian air space. However , the Mig21 were closest to F-16 already being on a combat patrol and first Indian planes to challenge the Pakistani F-16.

The Sukhoi 30 MKI was assigned to take a defensive position to protect the vital Indian army assets and therefore did not directly engaged with F 16 . However , the Indian Air Force, later on, confirmed that Pakistani F16 had fired five AMRAAMS BVR from a standoff distance over 60 KM, to provoke the Sukhoi 30 MKI . All these AMRAAM missiles were easily jammed and neutralized by Indian Sukhoi 30 MKI .

Pakistani F16 had ignored the presesnce of Indian Mig21 and paid the price for this blunder. The Indian Mig-21-Bison equipped with latest Multi-Mode Radar, Israeli Helmet Mounted Display And Pointing System and combat proved R73 close combat missiles made the Mig21 a formidable opponent for F16.

During this aerial engagement, the Indian air force pilot Wing Commender Abhinandan Varthaman  had managed to get a manual lock-on , on one Pakistani F-16  and fired his R73  missile .

The Russian R-73 missile has thrust vectoring capability and the R-73 missile once launched can make a 90-degree turn, which offers phenomenal manoeuvrability to R 73 missile. The R-73 fired at F-16  was a direct hit, and the Indian Mig pilot had scored his first Pakistani F-16 kill.

As usual, Pakistan continues to be in denial , because Pakistan is not allowed to use the US supplied  F16 for any offensive operation as per the US end user agreement. However, India has already produced the wreckage of AMRAAM missiles as evidence used by Pakistani F16.

The Russian R-73 is a close combat missile capable of thrust vectoring , which offers a very high manoeuvrability to R 73 missile. The Indian upgraded Mig-21-Bison is equipped with  Super Kopyo X-band Multi-Mode Radar , Combat proven R73 close combat missile and the Israeli made Elbit  Helmet-Mounted  Pointing and Display system gave a lethal edge to  the Indian Mig21 , as a formidable opponent to Pakistani F-16.

During this aerial engagement, another F-16 had fired two AMRAAM missiles at Indian Mig which shot the Indian Mig . The Indian pilot Wng Cmd Abhinandan  had safely ejected from his Mig21 after being hit by AMRAAM but unfortunately, his parachute drifted and he landed in Pakistan side of Kashmir.

The Mig 21 although an old machine,  but still continues to be a formidable opponent, especially after the upgrade program which equipped the Indian Mig-21-Bison with latest avionics , Israeli Elbit helmet-mounted pointing and display system  and  the combat proven weapons package.

Do let me know in comments, Your views on this legendary aircraft.