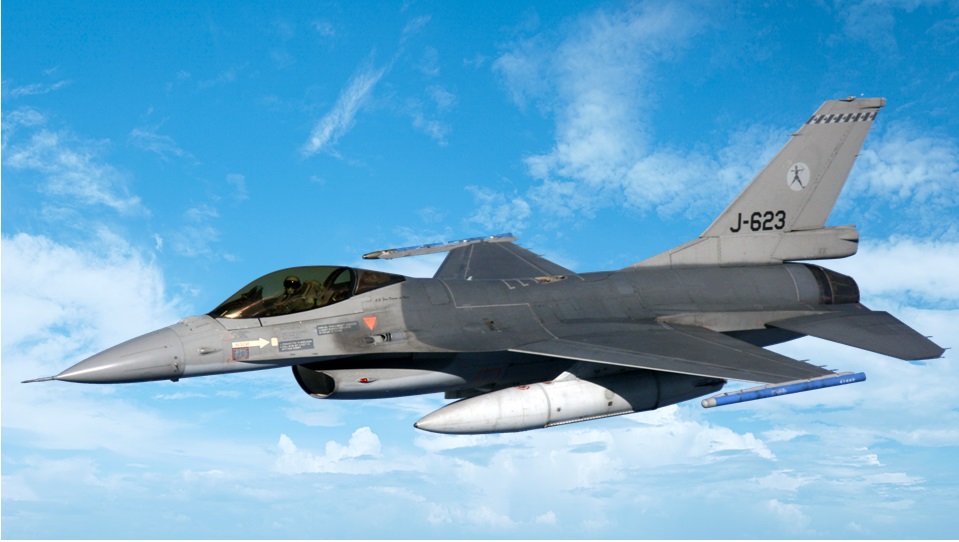 The F-16 is a legendary single engine supersonic multirole fighter jet designed for US Air Force. The F-16 was initially designed and developed by  US Defence major General Dynamics. General Dynamics, later on, sold the F-16 Fighting Falcon production line in 1993 to another US defence major company Lockheed Martin .

The F-16 bears the distinction of most widely used fighter aircraft in the world with more than 4500 F-16 fighters currently operational with many countries. Today we are doing to discuss the design features, combat history and the latest news related to F-16.

After the losses suffered and the experience in the Vietnam war , the US Air Force felt the need for a lightweight agile fighter jet primarily for air superiority role . The US air force Colonel  John Boyd started work on LWF – Lightweight  Fighter program . The US air force later on funded this LWF project  to develop a prototype based on Boyd’s work .

The US air force opted for competitive prototyping and initiated a request for proposal to build LWF prototype . Amongst the competitors , two selected companies that includes General Dynamics and Northrop were awarded contracts to independently build the LWF prototype . The US air force eventually decided to go ahead with YF-16 prototype and in 1975 , General Dynamics was declared as the winner of the Air Combat Fighter competition .

The US air force awarded the contract to build the first batch of fifteen to General Dynamics who had won the  Air Combat Fighter competition. The First batch of  F-16 was inducted in US Air Force to join 34th Tactical Fighter Squadron on 1st October 1980. During the Paris Air Show in 1975 , a group of four European countries  together placed the order for  384  F-16 to be produced in two new production lines in Netherlands and Belgium .

The F16 was originally designed as a light air superiority fighter jet primarily meant for air defence missions. However, the F-16 was subsequently redesigned as multirole fighter jet which can effectively perform both Air-To-Air and  Air-to-ground missions.

However, all new F16 variants had retained the airframe as per the airframe designed. All the changes incorporated into the subsequent variants were in line with the original design theme of LWF – Lightweight Fighter as proposed by Col Boyd and his design team.

The Combat History Of  F-16

The  US Air Force operates the one of the largest fleet of  F16 which has played a major role during various combat operations . The US air force extensively used  F16 during Iraq war during operation desert storm  to enforce the no-fly zone over the skies of  Iraq .

Pakistan acquired F-16  from the US in 1983 as a part of US assistance for providing support to US forces operating in Afghanistan. Pakistan had acquired total of 85 F-16 fighters and Pakistani air force operates a total 71 with a combination of six different variants.

Pakistan had again tried to acquire additional eight F16 and associated weapons worth  $ 699 Million. However, the Obama administration had blocked this deal due to Indian objection raised by Modi government.

The Kargil war started in 1999 when Pakistani forces intruded in Indian side of Kashmir in Kargil which is border town in the Indian state of Jammu and Kashmir . The India army and air force launched  a massive counter attack to flush out the Pakistani intruders .

The India Air force successfully managed to keep  the Pakistani Air Force F-16 and other planes providing any operational support to the Pakistani forces deployed  in Kargil war .

The Indian air force carried out a major surgical strike against terrorist training camps at three locations deep inside Pakistan. The Indian Air Force had used twelve Mirage 2000 equipped to Spice Laser Guided Missiles for this operation .For this operation , the Indian Air Force had also deployed Sukhoi 30 MKI Air Superiority Fighters to handle any response by Pakistani air force .

The Indian Air Force surgical strike had successfully destroyed these three terrorist camps and  over 250 Pakistani terrorists  were  killed in this operation.

The Indian Surgical strike using Indian air force came as absolute shocker as this is for the first time the Indian government had taken a punitive action against Pakistan . The Indian Prime Minister had repeatedly warned Pakistan for these impending Indian surgical strike.

However despite these clear indication , Pakistani air force did not offer any resistance during these IAF raids and the PAF  avoided head-on engagement with Indian air force planes during surgical strike .

The Pakistan government and Air force had to face criticism for complete inaction against Indian surgical strikes . On the next day morning as a face saver , a formation of Pakistani F-16 made an unsuccessful attempt to attack  Indian army brigade head quarter along the border in Indian side of Kashmir.

The three Pakistani  F-16 intruded in Indian Air Force were challenged by two Indian Mig-21 Bison which were already on the combat patrol  in the same area and the first one to engage in aerial combat with Pakistani F-16 .

During this dog fight , the Indian Mig-21 Bison managed to get a lock-on on one of the F-16 and fired his R-73 close combat missile . The Indian Mig-21 Bison the latest upgraded version equipped multimode radar , Israili Elbit Helmet Mounted display with R-73 is a formidable opponent in any dog fight  which Pakistani pilots realised too late . The R-73 fired by Indian Mig-21 was direct hit and Indian pilot Wing Commander Abhinandan had scored its first historic Pakistani F-16 kill .

The initial variants of F-16 were equipped with mechanically scanned  pulse Doppler radar . Later on AESA – Active Electronically Scanned Array  radar was introduced for F-16 in 2003.

The initial variants of F-16 A / B were equipped with AN/APG-66 a mechanically scanned radar . This was a Pulse Doppler Radar originally designed by Westinhouse Electric Corporation  US  .

The AN/APG-66 radar was capable of detecting targets up to 150 KM . The Northrop Grumman later on  introduced many upgrades to enhance the radar capabilities .

The  APG – 68 was mechanically scanned radar introduced with significant improvement with radar scan range of  296 KM as compared to 150 km range for APG-66.

APG – 68 also had SAR – Synthetic Aperture Radar capability  . The SAR capability provides pilot with 2D and 3D images used to get information about topography of the area.

The SAR provides high-resolution , all terrain , day and night and weather independent  2d , 3D mapping of area to the pilot .

The AESA – Active Electronically Scanned Array  radar for  F-16 was first developed by Northrop Grumman   in 2003. The APG – 80  AESA  Radar was developed for F-16 Block 60 variant specially designed for UAE – United Arab Emirates  and entire development cost for $ 3 Billion was funded by UAE.

The APG – 83  is a multi-functional and multi-mode  AESA Radar which provides the same capabilities similar to F22 APG-77 and F-35  APG-81. The APG – 83  upgrade does not require any modification in airframe or cooling system.

The F-16 has total nine hard points  for carrying the weapons payload .

The AIM-9 Sidewinder is one of most successful close combat missile with proven track record of  estimated 300 kills .

The F-16 Cockpit has been designed with single piece polycarbonate bubble canopy which provides a 360 degree view to the pilot . The toughened polycarbonate canopy provides protection against bird hits and other impacts .

The F-16 head-up display ( HUD ) has been designed to provide situational Awareness to the pilot  by projecting visual combat and Flight data information in front of the pilot without obstructing the front view of the pilot.

The F-16 Cockpit has two prominent Multi-functional display ( MFD ) which provides all vital information and data to the pilot . The F-16 Block 40 onwards is compatible with Boeing designed  JHMCS –  Joint Helmet Mounted Cueing System which provides ability to pilot to engage target just by moving head in the direction of target .

In this completion the Lockheed martin had pitched latest  F-16 Block 70 with AESA Radar . However , the French Rafale  Jet was eventually declared winner and Indian Government placed the order for 36 Rafale in flyaway condition from Dassault Aviation in 2015 .

However , the Indian Air Force urgently needs substantial number to restore 42 squadron strength . And therefore , the Indian Government once again floated requirements in 2018 for additional 114 fighters under MMRCA2 competition . The MMRCA2 also includes setting up production line in India under “Make In India” initiative .

India is heading for a election in April 2019 and MMRCA2 is expected to be fast tracked once the new government is in place.

As a part of MMRCA1 bidding , Lockheed Martin had offered to move the entire F-16 production line from US to India if  F-16 is selected for MMRCA contract . Lockheed Martin has already formed a joint venture company with  Indian company Tata Advanced Systems to manufacture F-16 in India .

This joint venture company “Tata Lockheed Martin Aerostructures Limited”  has already constructed a manufacturing  facility and started operations in Hyderabad . Initially , this facility would manufacture the wings for F-16 .

The Indian government dropped F-16 Block 70 offered under MMRCA1 in 2003 because it is a four decade old platform , the F-16 already in service with Pakistani Air Force . Further, US reservations and conditions for transfer of technology .

For  MMRCA2 competition floated in 2018 for 114 fighters , the Lockheed Martin has now pitched F-21 which is a  new avatar of F-16 Block 70 . Lockheed Martin has claimed F-21 as completely new platform which will be the most advanced version of F-16 ever produced with latest features .

The new F-21 will incorporate some of the most advanced fifth-generation technologies from  F-22  Raptor and F-35. The F-21 features include

Why India Should Consider F-21 Offered By Lockheed Martin

Despite the vintage airframe,  the legendary F-16 has gone through technological evolution over a period of last four decades, which makes F-16 still a modern multirole fighter jet. The existing F-16 family with 4605 currently being operated by 25 countries is a huge opportunity for India.

The Indian Air Force also needs to induct new fighter in large number to quickly ramp up the critical squadron strength. The Indian government eventually might be tempted to procure F-21 in sizable numbers which will much cheaper as compared to Rafale.

The Rafale still a very strong contender and possibly the best option for IAF requirements, despite the recent political storm and its price tag. It is very likely that the Indian government will be going ahead with additional Rafale through G-to-G deal under MMRCA2 program which will be the mainstay for IAF till fifth-generation aircraft is inducted.

However, irrespective of the outcome of the Indian MMRCA2 program, the legendary F-16 with its combat proved track record, is going to be a  formidable fighter jet for the next three decades.

Do let me know your thoughts on this in comments.