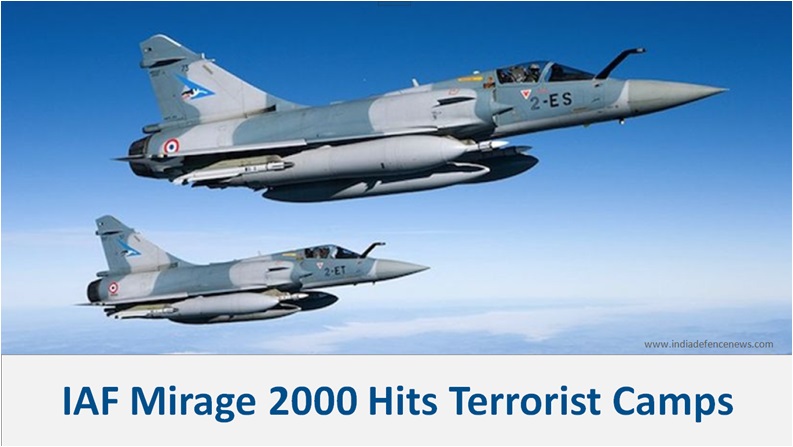 The Indian Air Force has carried out yet another Surgical Strike on three terrorist camps run by Jaish-e-Mohammad, operating from Pakistan. As promised to the Nation, Prime Minister Narendra Modi has delivered a devastating blow to the terrorist camps present in Pakistan and Pulwama attack has been successfully avenged.

Indian Airforce twelve Mirage 2000 with a massive payload of 1000 KG bombs destroyed all three major terrorist camps in Balakot , Muzzafarabad and Chakothi  in POK – Pakistan Occupied Kashmir. As confirmed by the spokesperson of Indian Ministry Of Defence, the operation was successful and all targets were eliminated successfully without any loss to the Indian Air Force.

Pakistani terrorist group , Jaish-e-Mohammad has carried out yet another bombing attack on a CRPF convoy in Pulwama region of Jammu and Kashmir on 14th Feb 2019. This suicide attack marks the beginning of the suicide attack in Kashmir.

In this attack, 40 CRPF paramilitary troopers have been killed and many more  CRPS jawans have been critically injured. This attack has been carried out by  Adil Ahmed Dar who is a 21 year old youth from Kashmir trained by Pakistan based terrorist group, Jaish-e-Mohammad , who had claimed the responsibility for this terrorist attack.

The Jaish-e-Mohammad terrorist, Adil Ahmed Dar  in a suicideattack,, rammed his  Mahindra Scorpio SUV, packed with 300 kilograms of  high grade explosives on the convoy  of  78 vehicles carrying the 2500 CRPF soldiers deployed in Kashmir .

As per the reports , The Pakistani intelligence agency ,  ISI in connivance with  Jaish-e-Mohammad  planned and executed this ghastly attack .

This attack had triggered a wave of anger in India and also across the world .  In a nationwide address , The Indian Prime Minister Narendra Modi assured the nation a befitting reply to Pakistan .

Prime Minister Narendra Modi , in his address, warned the terrosists groups operating from Pakistan ,Pakistani Army and the ISI  , that they have committed a grave mistake by carrying out this cowardly attack and now , they need to face  serious consequences .

India , now being a financial superpower  and  fourth  most powerful armed forces in the global ranking , had a number of options . Indian government responded with a number of actions against Pakistan , which includes

Indian armed forces are far superior in terms of sheer size and capabilities as compared to Pakistan . India has already defeated Pakistan in all the four wars started by Pakistan after 1947 .

After carrying out a cowardly terrorist attack on Indian security personnel at Pulwama, the Pakistani armed forces were on a state of full high alert to provide the protection to the terrorist camps. Most of these camps were shifted within the Pakistan Army cantonment areas in the anticipation of Indian counterattack.

However, This time the Indian government decided to hit Pakistan by going much dipper inside Pakistan .  Pakistan had already activated its air defences and the Pakistani Air Force planes were also kept ready.

The Indian Air Forced  used  Mirage 2000 with 1000 KG  , latest SPICE 2000 Missiles , which are considered to be very effective for large scale destruction . The Indian Ministry Of Defence had done a brilliant planning for this operation.

The Mirage 2000 are also equipped with Laser Designation Pods which helps the pilot to deliver the weapon payload with pinpoint accuracy even during night operation.

Weapons Used By Mirage 2000 For this Operation

The Indian Air Force has used Israeli Rafael made SPICE 2000 smart Laser Guided Bombs. These bombs are considered to be with “Drop And Forget”Capability and can hit the target with pinpoint accuracy. The SPICE 2000 bombs are equipped with 1000 KG Warhead which renders total destruction of the target.

The SPICE 2000 bombs also have the capability of  Satellite Guidance to hit the target with deadly accuracy.

United States :  US has defended India’s right for self-defence.

There has been overwhelming support for India and the international community had condemned Pakistan sponsored terrorist activities across the world.

Pakistan :  Pakistan is yet to recover from this attack. Most probably will be in denial mode as usual.

In response to the Indian surgical strike conducted by the Indian air force , right deep inside Pakistan on early morning 3.30 AM , on Tuesday 26th Feb 2019 , the Pakistan air force response came on the next day morning.

The Pakistan air force made an unsuccessful attempt , to target the  Indian Army’s command headquarters situated in the Naushera sector in  Indian side of Kashmir . The Indian air force had anticipated this response.  The Indian Air Force was already in a state of high alert and ready to engage any Pakistani attack.

On 27th February  2019 morning, a large formation of the Pakistani air force was spotted on the Indian radars. This Pakistani formation, consisting of total sixteen fighters aircraft which included eight F-16 ( Block 52 standard  ) , escorted by four Mirage – 3 and four Chinese made JF – 17 interceptors .

The Indian air force immediately rushed a formation of  only eight fighter planes to engage the Pakistan air force formation. The Indian formation included four Sukhoi 30 MKI  , two Mirage 2000 ( Upgraded ) and two  MIG 21 Bison. However, the two MIG 21 Bison were already airborne , being on combat patrol and the first one to reach the combat zone.

The aerial engagement started when three Pakistani F-16 intruded into the Indian airspace  with mission to hit the Indian army ’s brigade headquarters. These three F-16 could not reach their targets and dropped the bombs near to the brigade headquarter. The Pakistani F-16 had already tracked the movement of incoming IAF planes approaching towards them for engagement.

These F-16 were first intercepted by two MIG 21 Bison . The MIG 21 Bison , although it is a soviet era aircraft but upgraded one with latest Israeli multi-mode radar and combat proven Russian R 73 and R 77 missiles .

This was a direct a direct hit which shot down one of the F-16. This was a fight between one MIG 21 Bison against three F-16. However during this engagement , One of the F-16  had also locked-on to Wing Commander Abhinandan’s MIG 21 and fired two AIM 120 C-5  AMRAAM Missiles. Out of these two AMRAAM missiles fired , one missile missed the target but the second missile hit the  MIG 21.

After shooting down one Pakistani F 16  and getting a hit by AMRAAM missile, the Indian pilot wing commander Abhinandan ejected out of his MIG 21 . Although, the wreckage of the MIG 21 fell down on the Indian side of Kashmir. Unfortunately, his parachute drifted and he had to land on the Pakistan’s side of Kashmir. Later on, Wing Commander Abhinandan was arrested by the Pakistan army, with the help of villagers from the POK – Pakistan occupied Kashmir.

India mounted intense diplomatic pressure on Pakistan for the release of their pilot under Pakistan’s custody . The fear of escalation by India had worked and as a result , Pakistan unilaterally decided to release the Indian pilot, wing commander Abhinandan within 48 hours . Pakistan nicely wrapped this event as a gesture of goodwill but Pakistan had no other choice.

As per the video evidence available, the F 16 shoot down by MIG 21 with R 73 Missile , although both the F 16 pilots had ejected from F 16 , but one pilot got killed in this crash . The F 16 wreckage fell down inside Pakistani side of Kashmir . Initially , Pakistan kept denying the F 16 loss but now the information about the F 16 pilot who lost his life has already been circulated in the social media.

As per the tweet by Indian Air Marshal Raghu Nambiar , the F-16 pilot who lost his life after being shot down by the Indian MIG 21 , has been identified by the PAF as, Wing Commander Shahaz-Ud-Din and incidentally, he happens to be the son of Pakistani Air Marshal, Waseem Ud Din , who is currently in serving as Deputy Chief Of Air Staff  with  Pakistan Air Force.

As per the media reports , both the Pakistani pilots of the downed F16 aircraft had landed safely in the Pakistani side of Kashmir , but they were beaten up by the Pakistani villagers mistaking them to be Indian pilots. However , Pakistan government and the army is still in denial and disowned their own martyred pilot , as this will expose the fake Pakistani propaganda.

What Modi Government has Achieved with the Surgical Strike

The surgical strike conducted by India against terrorist camps in Pakistan is a major achievement. So far, despite conducting terrorist activities in India , Pakistan used to play a nuclear card as deterrence. This surgical strike has sent a very loud and clear message to Pakistan, that India will now onwards exercise its right for self-defence by conducting such surgical strikes.

How many terrorists died in the surgical strike is not that important. What is important is , for the first time , the Indian government led by Prime Minister Narendra Modi has demonstrated the political will , determination and the courage to conduct a surgical strike using air force , deep inside Pakistan by crossing the LOC.

Pakistani were very lucky this time and got away with the loss of only one F-16. But just a few months from now, the Indian Air Force will be inducting Rafale and S-400 air defence system. The impending elections in India also helped Pakistan as the Indian surgical strike targetted only terrorist camps  and that may not be the same next time .

However , the real culprit is the Pakistan army and the ISI ( Pakistan Intelligence Agency ) which provides the necessary support , training , weapons and money to various terrorist groups operating from Pakistan. If Pakistan provokes India again , then Indian response will be much bigger.

Do let me know your views on this issue. I am waiting for your comments.