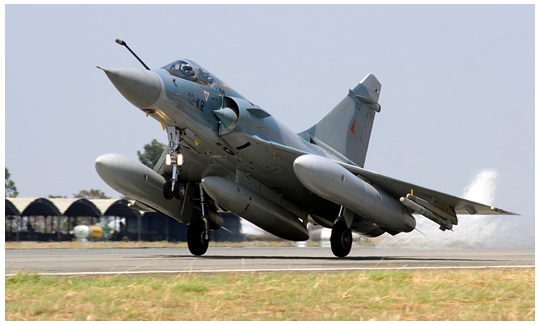 The Mirage – 2000 By  French Dassault Aviation

The Mirage 2000 is in service with the French Airforce since 1984 and the first operational squadron was also formed in the  same year on the eve of  50th anniversary of the French Air Force.

The Dassault has exported Mirage 2000  to many countries which  include India , Taiwan , Abu Dhabi, Greece, Egypt, Qatar  and Peru. The total of almost 600 Mirage’s is currently operational worldwide which makes it one of the most successful fighter planes in Dassault clan.

The Mirage 2000 was initially conceptualized in 1965 and  planned to be designed in collaboration with Britain under joint venture project  “Anglo-French Variable Geometry” ( AFVG ) which was designed to be a  swing-wing aircraft.

After working for two years on this project the French Dassault decided to exit from this project on the grounds of cost and other differences. The Dassault had already done substantial work on delta wing model which is based on variable-geometry aircraft design.

On the other hand , Britain decided to join the hands with west Germany  and Italy , After the French exit from  “Anglo-French Variable Geometry”  project and started work on to produce the Panavia Tornado aircraft .

Subsequently, Dassault also experimented with twin-engine version of Mirage G8 but this aircraft turned out to be very expensive as compared Mirage F1 and this design was later on cancelled . By  1988  the nnuclear-capable Mirage 2000 N was also operational . This variant was designed  to carry the Air-Sol Moyenne Portée (ASMP) nuclear stand-off missile capable.

Although  Mirage 2000  inherits its legacy from Mirage III but these are two totally different aircraft.

The Indian government approved the acquisition of  Mirage 2000  for Indian Air Force ( IAF )  in response to the induction of F-16 in Pakistani Air Force  provided by the US . India placed the order with Dassault Aviation in October 1982  for two squadrons of  Mirage 2000 Hs which consist of  36 single-seat planes and  4  twin-seat  Mirage 2000 THs which is a trainer version . The first squadron of Mirage 2000 became operational in Indian air force on 29th June 1985 .

The Indian government were  negotiating with the French government  for the acquisition of  total 150 planes . As per this plan, the two squadrons  were to be purchased in flyaway condition and the remaining would be manufactured by Hindustan Aeronautics Limited ( HAL ) under license .

However , this plan was scraped due to political reasons mainly due to Russia being the largest supplier weapons to India. The Indian government instead  decided to acquire Soviet Su 30 MKI air superiority fighter in substantial numbers . Later on India  started locally  manufacturing Su 30 MKI under license and  this number is close to 250 planes assembled by the HAL .

The  Kargil war is the fourth armed conflict between India and Pakistan fought in the hilly regions of Kargil  district of Kashmir in 1999 . The Kargil war started by Pakistan by infiltrating into the Indian Kashmir and occupying the Indian posts located along the hills of Kargil. These forward posts are  vacated by the Indian army every year due to extreme cold weather conditions .

Total of twelve Mirage 2000 was used to carry out these attack. These attacks were conducted on three places in Pakistan which were being used by Jaish-e-Mahommad, a terrorist group operating from Pakistan who had claimed responsibility for the recent Pulwama attack, in which 40 Indian CRPF soldiers lost their lives in a suicide attack.

The Indian Air Force successfully destroyed all the targeted terrorist camps in Pakistan using SPICE 2000 Missiles and all  Mirage 2000 safely returned to the base.

Mirage 2000 has recently been upgraded and the new weapons package might include  latest Storm Shadow / SCALP Missiles designed by MBDA. These missiles are especially used for long range deep strike ground attack weapon.

The Scalp Missile weight is around 1300 KG each, which is a conventionally armed with range exceeds 250 KM. The Scalp Missile is currently being used by Britain, France and Indian Air Force.

After three decades of service with IAF , the Indian government finally decided to upgrade the Mirage 2000 . These upgrades were a major upgrade and the negotiations for these upgrades  lasted for almost seven years with the French government .

The Indian government  signed an agreement for $2.1 billion with French companies Thales and Dassault Aviation in July 2011 for up-gradation of 51  Mirage 2000Hs  currently being operated by the  IAF .

As per this contract , these OEM ( Original Equipment Manufacturer ) companies will upgrade the Indian the 51  Mirage 2000 to Mirage 2000-5 standard. The agreement also includes the supply of the latest systems and sub-systems as per the specifications specified in the agreement.

Under this contract, 4 planes have already been upgraded in France and the remaining 47 planes would  be upgraded by HAL as per the contract . A separate agreement for $900 million has also been signed with Hindustan Aeronautics Limited ( HAL )  in 2011 to carry out the up-gradation program for remaining 47 Mirage aircraft in India.

As per the contract , the French OEM companies Thales and Dassault Aviation were contracted as a lead integrator for the upgrade program. The French company MBDA  would provide the latest  weapons package for this upgrade program.

The scope of the upgrade program includes :