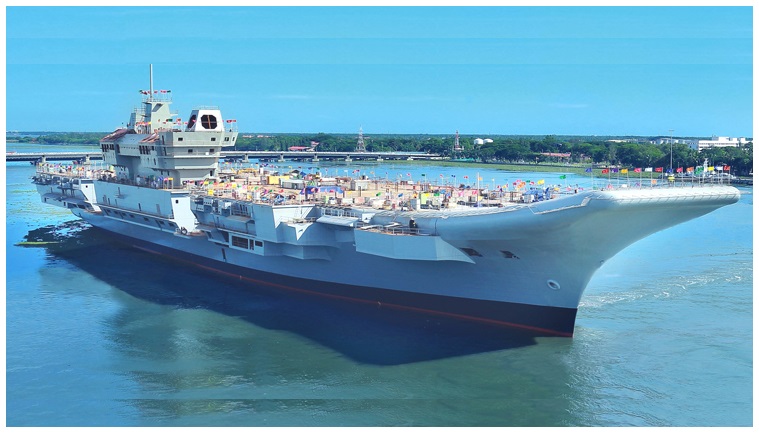 The Indian navy  might go ahead with the  construction of  one more aircraft carrier of  INS Vikrant ( IAC- I ) class as a contingency plan .  The  construction  work for   INS Vishal might be delayed because of the delay in finalizing the design specifications and budgetory allocations . The INS Vishal is still on the drawing board and the details are still being worked out. Further , INS Vishal is still awaiting the approval from MOD ( Ministry Of Defence ) .

The INS Vikrant has been  designed by the Directorate of Naval Design of the Indian Navy . This will also be the first  warship to be built by cochin shipyard . This aircraft carrier is  being jointly built by the active participation of a large number of private sector companies and public sector firms. The actual construction work for INS Vikrant started  at the Cochin Shipyard on 28 February 2009 .

INS Vikrant  will have the following specifications :

Indian Aircraft Carrier – INS Vikrant  is the first ever indigenous Indian aircraft carrier being built by  Cochin Shipyard Ltd  for Indian Navy. In the past , Indian Shipyards have built many ships for Indian navy . The construction of an indigenous aircraft carrier had to overcome many challenges . The aircraft carriers are made up of special AB/B Grade steel . This special steel was initially planned to be imported from Russia . However  Russian steel import could not materialize due to delivery issues . Finally,  a decision was taken to manufacture this special still in India itself .

The Indian private sector companies have been  actively involved in the construction INS Vikrant . Some of the most important vital components were manufactured and supplied within stipulated time by Indian private sector companies. Indian engineering giant  Larsen & Toubro manufactured the main switchboard , steering gear and watertight hatches needed for the carrier .

Initially, the LCA Tejas naval version was to be deployed on INS Vikrant. However , the LCA Tejas was not found to be suitable for INS Vikrant’s  deck landing operations . Although  LCA Tejas naval version is still under consideration but needs improvements . And therefore , LCA Tejas designed for carrier operations may not be ready by 2020. The Indian navy has already initiated the search for new fighter aircraft for INS Vikrant . The Indian navy had also issued RFP – Request For Proposal  to procure  57 new aircraft for aircraft carrier operations .The Indian navy has also received  responses to the RFP which are being evaluated . The French origin Rafale manufactured by  Dassault and the American F-18 Super Hornet manufactured by Boeing seems to be the preferred choice by the navy.

During the initial phase , INS Vikrant will operate Kamov KA31 , UK made Seaking primarily for ASW – Anti Submarine warfare. However , Indian Navy has recently decided to go ahead with the acquisition of 24  MH 60 SeaHalk from US , This  deal is again going to be another  G to G deal with the US  and the Indian government has also  given approval .

Aircraft carriers are large size ships which makes them vulnerable to many threats. The aircraft carrier has to defend against anti-ship sea-skimming missiles, torpedos fired by the submarines and long-range surface to surface missiles . INS Vikrant will be equipped with one of the most sophisticated Barak 1  and  Barak 8  SAM – Surface To Air missiles. The Barak SAM systems have been jointly developed by India and Israel . The Barak 8 was jointly developed by Israel Aerospace Industries ( IAI ), India’s Defence Research & Development Organisation ( DRDO ).