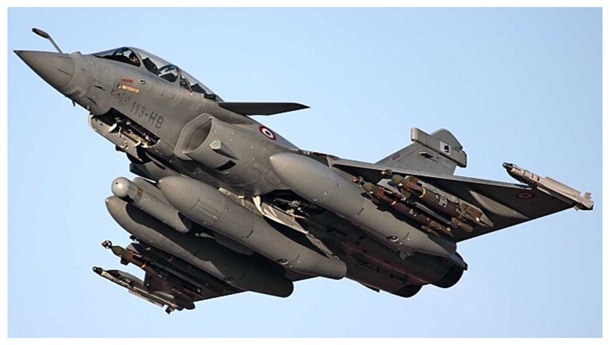 The  Rafale is a multi-mission, multi-role air superiority fighter plane designed and developed by French company Dassault Aviation. Over a period of last decades, The  Dassault Rafale has proved of combat capabilities with an excellent track record of performance.

The Dassault Rafale has also emerged as the most preferred choice for multirole fighter plane and recently bagged many international orders amongst most fierce competition.

In today’s modern warfare, the air superiority over your adversary is a major strategic advantage and plays a crucial role in deciding the fate of the war or achieving the mission objectives.

Historically, the nations with a modern air force that can enforce the air superiority have always won the war, even with the relatively smaller size of the armed force.

Why France Decided to Develop its own Fighter Plane :

During the late 1970 the existing ageing  aircraft such as Mirage 2000  in service with French Air Force and navy needed to be replaced  with  modern  contemporary technology planes .

In order to save the development time , share the project development cost and technology and to facilitate future sales , The French government decided to  join the consortium of four countries which includes  Germany , UK , Italy and span which was already working on the project Eurofighter Typhoon.

However as the work progressed on this consortium project , the disagreement immerged on many issues and the French government decided  to exit from the Eurofighter Typhoon project and  started working on building its own project .

The France started the work on the project for its own fighter plane and the first prototype of “Rafale Fighter” was ready in 1986 for the technology demonstration.

The  French companies already had prior experience in the design and development of state-of-the-art  Mirage 2000 which is also a delta wing formidable plane still in active service with many countries.

And therefore, the French companies had the advantage of already developed technological base for many critical technological areas such as Radar , Engine , Avionics , fly-by-wire technology and weapon systems . The Rafale canard-delta wing design is basically  an aerodynamically unstable  aircraft and therefore this design needs a digital fly-by-wire  flight controls to artificially enforce and maintain the stability of the aircraft with the help of onboard computers.

However , In terms of technology , the Dassault Rafale is in a class apart. The “Rafale Fighter” incorporates latest  avionics and features, such as Direct Voice input, the RBE2 AA , Active Electronically Scanned Array ( AESA ) radar and the Optronique Secteur Frontal ( OSF ) , Infra-red Search And Track ( IRST ) and all these new technologies had to be  specially developed by  French companies for the Rafale project . The French companies had developed all these technologies indigenously without any external assistance.

Although, the “Rafale project” did suffer some setbacks and delays due to project cost cuttings and budget cuts in the post cold-war era. It was indeed creditable for the French companies to entirely design and develop a  4.5 plus generation plane within such a short span of time on its own . The “Rafale Fighter” has turned out to be amongst the finest and the best in its class of  fighter aircraft.

The Rafale is multi-role and  multi-mission state-of-the-art fighter plane which is stated to be 4.5 plus generation . The Dassault Rafale design is based on canard-delta wing and powered by two engines . The Rafale has been designed and developed by French company Dassault Aviation which has an excellent track record of producing both world-class military and civilian planes.

Engine :  The “Rafale Fighter” is a twin-engine aircraft which  is fitted with two Snecma M88 engines. Each Snecma M88 engine is capable of producing up to 50 kN of dry thrust and 75 kN  with afterburners.

The Rafale in Ground Attack  Role  :

The “Dassault Rafale” has been specifically designed for both Air-to-air and air-to-ground roles and the Rafale has been marketed as an “Omnirole” to describe the effectiveness of the aeroplane in both the roles.

The integration of these sensor pods together provides all the required information to the pilot to get a lock-on to the target and provides the ability to conduct tactical reconnaissance missions.

This sensor pods system is also integrated with the Rafale’s IMA architecture necessary for sharing the real-time analyzed data and other information feeds to ground stations, friendly units as well as other pilots part of the formation.

The  Rafale is also equipped  with sensors for ground attack role and the scalp missiles which can strike ground targets up to 300 km with pinpoint accuracy .

For long-range ground attack role , the “Rafale Fighter” is equipped with SCALP EG  Air-To-Ground  missile and has an effective range of  560 KM. The SCALP EG  missile is manufactured by MBDA  .

The Rafale in  Air Supremacy  Role  :

The Rafale incorporates several passive sensor systems to effectively perform air supremacy role . The or. The Rafale fighter  makes use of  Optronique Secteur Frontal ( OSF ) which is a front-sector electro-optical system developed by French Thales. The OSF system is completely integrated within the aircraft and can operate both in the visible and infrared wavelengths.The OSF enables the deployment of infrared missiles such as the MICA at BVR – Beyond Visual Range distances .

The “Rafale Fighter” is now equipped with METEOR BVR developed by MBDA. The Meteor is an active radar guided BVR – Beyond Visual Range air-to-air missile that is capable of engaging the targets at very long distances over 150 KM. It has a “No Escape”  zone of 60 KM which is the largest amongst the contemporary BVR missiles.

The Meteor Missile can be effectively used against a wide variety of targets such as fighter jets, Cruise Missiles, UAV and other airborne targets. The Meteor is considered to be the best BVR Missile  in its class and a complete game changer.

France : The “Dassault Rafale” is currently in service with French Air Force and navy .

Qatar : Qatar became the second country to purchase 24 Rafale in 2015 .

India : Indian government placed the order for 36 Rafale Fighters . The Indian Rafale will be the most advanced variant of Rafale with some India specific enhancements such as helmet mounted display ( Similar to American  F35 )

The “Dassault Rafale”  is a 4.5 plus generation “Omnirole” Fighter jet developed by French aviation company Dassault Aviation. The Rafale fighter  has demonstrated its combat capabilities during various operations by French airforce. The Rafale is a formidable fighter jet very well equipped with a various sensor and the weapons package capable of performing both airto-air and  air-to-ground effectively .