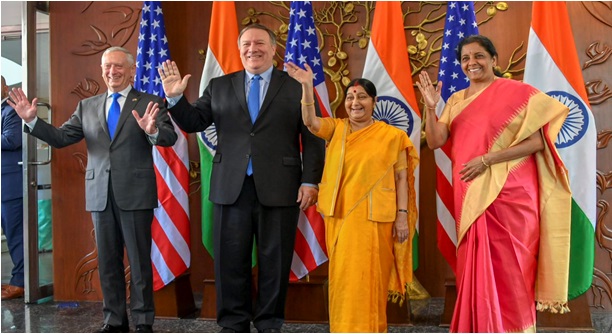 India US Strategic Partnership And Significance

India and US are natural partners and the convergence of  interests have brought both countries together. The two countries share a broad consensus on a range of political, economic, and security issues important for both the countries. The defence relations between the two countries has now become one of the most important areas of cooperation and the top priority for both the governments.

US President Bill Clinton’s Push for India US Defence Relations

After India’s independence in the year 1947 , India had to face major armed conflicts , first with Pakistan and then with China. The US supported Pakistan during the 1971 India-Pakistan war due to Pakistan’s role and support against Soviet forces in Afghanistan . During the cold war period , India was mainly dependent upon the erstwhile Soviet Union for its defence equipment needs . During this period , the US was unwilling to supply arms to India due to India’s  proximity to the Soviet Union  and the differences in various policy issues prevailed  between the two countries.

However , after the end of the cold war and the collapse of the Soviet Union, India US relations significantly improved and the US was now willing to supply weapons to India . The warmth in the India US relations and the initiative by President Bill Clinton  facilitated the defence cooperation between the two countries.

For the first time , US had agreed to supply GE 404 engines for India’s indigenous fighter plane program LCA Tejas. US had also supplied India’s first supercomputer which indicated a major shift  in US policies towards India.

The India US defence relations have witnessed a major boost and India has recently signed agreements worth $15 Billion in the year 2015 for the purchase of  various defence platforms needed for the modernization its armed forces.  India is currently modernizing its armed forces  and ranks amongst  the largest importer of arms in the world .

After the collapse of the Soviet Union , India continued its close defence ties with Russia and Russia  still continues to be the largest exporter of arms to India . However , Russian weapons are no longer available to India at subsidized rates offered during  cold  war period . Barring few weapon systems ( Example S-400 ) in terms  of  technology , most  Russian  weapons  are not comparable with the western systems.

The Russian economy has also gone through a tough time due to a rapid decline in oil prices and the effect of sanctions imposed on Russia by the US and European countries .  The collapse of the Soviet Union has also severally disrupted the supply chain for spare parts and other vital components for Russian arms . Non-availability of spare parts has now become a chronic problem for a large number of weapon system being used by the Indian armed forces.

The Russian arms currently being manufactured in India are only being assembled  from the kits imported from Russia . Russia is reluctant to provide the transfer of technology  for full-scale production in India . As a result , India is still dependent on Russia for the supply of crucial spare parts and the maintenance of these equipment purchased from  Russia . This is despite India being the largest market for Russian arms.

Russia is now  resorting to Indian arm twisting tactics by selling weapons to India’s arch-rival  Pakistan . Russia has also developed close defence relations with  China . Russia has recently sold top of the line Su-35 fighters and  S-400 system to China which will be used against India . Needless to say , China will soon create a cheap pirated imitation copy of these Russian systems by reverse engineering . In the past , China has produced cheap imitation copies of most Russian defence systems imported from Russia .

Why does India want to purchase US arms ?

The warmth in the India US relations over the last two decades and the subsequent shift in the US policies favourable to India has developed a sense of mutual trust between the two countries . The US is no longer afraid of  Russian influence in the Indian market and ready to accommodate India specific requirements.

The US India  defence cooperation  initiated during US President Bill Clinton’s tenure has now developed into a full-fledged strategic partnership due to the convergence of interests important for both the countries .

The  Indian fear for unpredictable US behavior and  the possibility any future US sanctions have also gradually declined . The Trump administration has not invoked any sanctions against India so far despite  the Indian purchase of Russian S-400 system and  purchase of Iranian oil . US has also not objected to India’s recent successful tests of  long-range nuclear-capable missile ( Agni 5  SSM )  tests which both China and Pakistan objected to.

US India has already sealed two crucial foundational agreement necessary for the sale of  high tech defence equipment to India . US companies are going all out to establish a firm grip on the lucrative Indian arms market .

US Interest In Indian Defence Market

India has the fifth largest defence budget in the world and the Indian government will be spending close to $ 150  Billion on the modernization of Indian armed forces in the next five years. The “Make In India” is a flagship program for the Modi government and defence manufacturing is top on the agenda for the government . The Indian government has already sanctioned the total budget  $63 Billion for the Financial year 2018-19.

US companies always wanted to get entry into the lucrative Indian arms market. However , India US defence cooperation could not develop because of India’s insistence on local co-production in India  and US reluctance during cold war period for such  technology  transfer.  The Indian policies for mandatory co-production  prevented the US companies from selling  arms to India.

However ,  the collapse of the Soviet Union cleared the major hurdles  and  US opened the doors for arms export to India and  started developing defence ties with India . The Indian economy has also gone through major reforms and liberalization . India had opened many sectors for  private sector investments especially in defence to attract the foreign direct investments in India .

India is an important element of quad alliance shaping up amongst US , India , Japan and Australia . The recent Indian standoff with China over  doklam ( In Bhutan )  clearly shows India’s resolve to take the China head-on .  The defence cooperation between India and the US  is important to get access to  sophisticated US weapon systems in order  to bridge the combat capability gap with China.

India US partnership is extremely important for both countries. The Chinese imperialistic ambitions, expansionist policies and scant respect for international laws  will create many conflicts in future . And therefore , The quad alliance is an important initiative necessary for regional security in the Indian Ocean .

China’s aggressive posture in the South China Sea and the denial to accept the verdict given by international court  has raised serious concerns about China’s intentions. The Chinese intimidating tactics and refusal for the right to navigate in South China sea international waters have created a potential flashpoint with the US. China is completely isolated on this issue with the rest of the world .

The Chinese navy is aggressively expanding and also flexing its muscles in the Indian Ocean . The QUAD alliance has been formed  amongst  US, Japan, Australia and India  to keep the Chinese expansionist policies under control .

The  Quad alliance was first proposed  by Japanese Prime Minister Shinzo Abe in 2007. The QUAD is a group of the four like-minded democracies with common strategic objectives formed to enforce the rule of law and the regional security in the International waters.

China’s open support for  international terrorist Masood Azhar  jeopardising its own credibility is a matter of serious concern  . China is repeatedly blocking India’s attempts at the United Nations to add the Mumbai attack mastermind Masood Azhar as a global terrorist. Masood Azhar is  chief of Pakistan-based  terror group Jaish-e-Mohammed ( JeM ) responsible for carrying out  many terrorist attacks in India .

The US has  always cited the absence of  necessary framework as main reason for technology denial . The foundation agreement framework will enable the US companies to sell the latest weapon platforms and technology transfer for indigenous local production in India. Both the countries had started the discussion on these important agreements long back and the US managed to address  the Indian concerns . Out of the three foundational agreements , India has already signed two agreements after prolonged negotiations with the US.

The Logistics Exchange Memorandum of Agreement ( LEMOA )  was the first agreement out of  three  foundational agreements necessary  to be signed between US and India . This agreement would facilitate the  mutual exchange of logistics support, supplies and services ( LSSS ) between the armed forces  of both countries operating in different parts of the world.

Both India and US  managed  conclude this agreement after  prolonged negotiations lasted for almost for a decade and eventually  signed the  LEMOA  in 2016 .

The LEMOA agreement will allow  both the countries to get access to designated military facilities on either side for logistics support such as refueling and replenishments during various operations .

These operations include port calls, joint exercises, humanitarian assistance , training and disaster relief . The SOP ( Standard Operating Procedures ) are being worked out to facilitate its implementation .

This  act is originally  referred to as the Communication and Information on Security Memorandum of Agreement ( CISMOA ). However , India had some serious reservations about certain provisions of this act . This act was later on modified to accommodate India specific concerns and  changed to COMCASA to signify its India-specific alterations. India is now a signatory to this act and signed this act in recently concluded two plus two meeting between US and India .

The third and the last one remaining foundational agreements that still needs to be signed is the Basic Exchange and Cooperation Agreement for Geo-spatial Cooperation ( BECA ).

The BECA agreement intended for Geospatial Cooperation. This agreement would enable the mutual  exchange of geospatial information between India and the United States for both civilian as well as for military use.

Why India Insist On Technology Transfer

This always been an endeavour of the Indian government  to develop indigenous defence equipment production capability. India has always insisted on  putting a technology transfer precondition for most of the defence platforms purchased in the past . In the past , India has ensured technology transfer for Bofors howitzers purchased from Sweden , Germen HDW submarines , Su30 MKI from Russia and Scorpean Submarines being manufactured by mazgaon dock  with technical collaboration with France.

India  has signed a number Of defence equipment purchase agreement with the US . Most of these agreements are government to government deals between both countries . The India US defence deals include :

Both India and the US are moving towards building a strategic partnership based on mutual trust and shared values . India US relations are  going to play a significant role in twenty-first century . Russia has always been an invisible part of  India-US relations and it will remain so . It is also going to be  a challenge for India to  strike a balance between US and Russia .

The Chinese imperialistic ambitions , expansionist policies and complete disregard for international laws will trigger many conflicts in future . India and US are natural partners and great democracies . US needs to be  realistic in its expectations while dealing with India . It is not in India’s best interest to downgrade relations with Russia for obvious reasons.

Both India and the US need to focus on important strategic objectives and  take the defence cooperation between the two countries to the next level .

Do let me know what you think about India US defence relations.

I am keen to hear from you.